Our final day of vacation. We checked out of our hotel and they allowed us to leave our car there until 4 p.m. so we could finish off some things we wanted to see and do before heading off to Montreal for a stopover. Such as the tour of the crypt. But first we wanted to check out some stores on a street just around the corner from our hotel that we hadn't had a chance to explore yet. I saw this window display, and well we didn't get to far from here. We ended up spending a couple of hours in this store known as Boutique Medievale (bear with me I don't know how to use the accents on my computer). 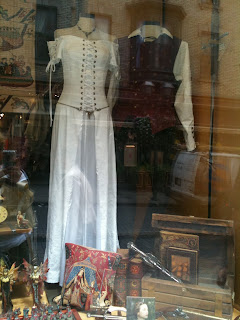 They had clothes, hats, scarves, jewellery, daggers, swords, chalices, chessboards, tapestries etc. Everything for the medieval enthusiast. I was in heaven!!! We all ended up with something and for Daniel's birthday we ended buying Troy Chess pieces with a sweet chess board made to look like a castle wall with turrets on each corner. He has been dying for a really nice chess set and we found numerous ones here. Took him awhile to pick the pieces and chessboard, and later that night in our hotel room he beat his dad's butt in chess.

We had to go back to the hotel and deposit our purchases in the van, and grabbed some lunch (did I mention we lost track of time, whoops) and headed back to Notre Dame Basilica.

The guide I spoke to the evening before was busy, but a young lady was more than helpful and took us through a secret door at the back of one of the side altars, down a spiral staircase into the crypt. I was allowed to take pictures, but not allowed to use a flash so some of the picture are of poor quality due to a low shutter speed and no tripod to keep the camera steady.

First off we have the memorial plaques to Champlain and some of the first Governor Generals of New France. In the crypt, if the cross is white, they do not have the person's remains, but if the cross is black, they have the remains and they are place behind the plaque in the crypt. They do not have Champlain's remains, but they have been looking for years in hopes of finding them. They believe his remains would have been treated very much like Bishop Laval's (which they do have), and it is very possible they would have been buried near or in the basilica. 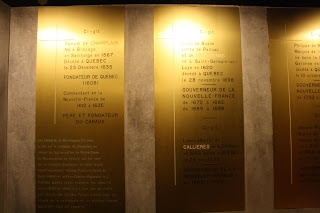 The main part of the crypt is where the bishops, archbishops, cardinals are buried. You can tell what their rank in the church is based on the number of tassels on their plaque. A number of bishops have a spot in the crypt, but are buried in France as they never even came to New France during their term as Bishop of the Parish. 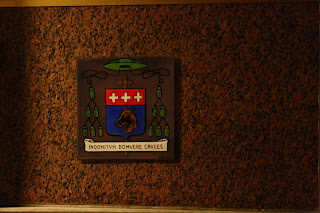 View of the clergy catacombs in the crypt. 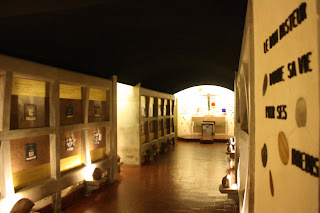 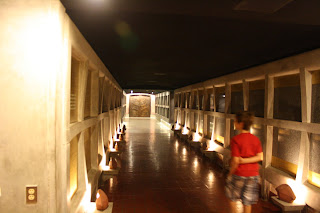 Here we have a shrine to a number of Jesuit priests that were killed by Native Americans in the early years of European settlement. They are considered martyrs and the basilica has relics of four the Jesuit priests. 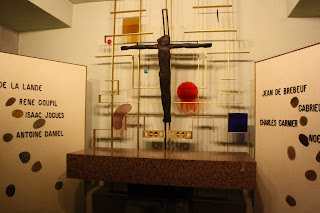 And now we are getting ready to go into the crypt where the civilian remains are. But first we had to pass through this ornately carved wooden door. The carvings represents various stages of Bishop Laval's life. 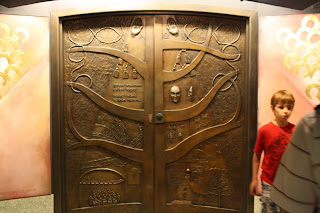 The crypt itself is very very dark, with two extremely large ossuaries containing the remains of over 900 people. They also have Bishop Lava's casket on display. They accidentally found his casket while doing renovations under one of the choirs in 1877. And with this discovery and subsequent reburial, there were quite a few celebrations and ceremonies throughout Quebec City. You can read a bit more about what had gone on with the discovery of Laval's casket here. And also read about Bishop Laval and his importance in Quebec history here. 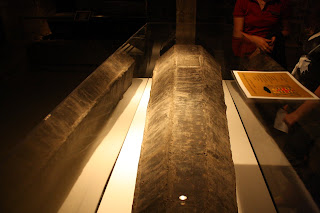 Here is a picture of site just outside the crypt that that they are excavating looking for more remains. The original cathedral was not as large as it is now, there was a cemetery on either side of the cathedral and also within the cathedral itself, very much like in Europe. A number of families had their own pews and underneath these pews you would also find the family burial plot. If someone in the family died, they would remove the family pew, lift up some of the stones underneath, bury the person, put everything back for the next mass. With the reconstruction of the Basilica in 1923 after an other devastating fire, they moved the remains from the cemetery and in the Basilica to this crypt. Our guide explained that to this day residents and workers in Old Quebec still find human remains during renovations, gardening etc. and bring them to the basilica and the remains are placed in one of the ossuaries. 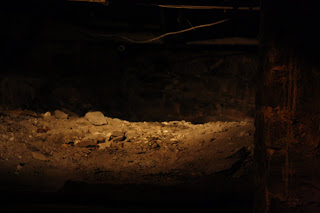 This is one of the best pictures of one of the ossuaries I could find. We then managed to see the register and with a list of names provided by Dave's sister Mary, our genealogist, and his mom. we went through the whole list a few times and managed to match some names and sent them off to the family. Mary was going to try and see if they match based on the info she has managed to find so far of their ancestors. One thing I know, there were a lot of Maries and Jacques in both lists. Whew. And our guide was so kind and patient waiting for us to finish our research. 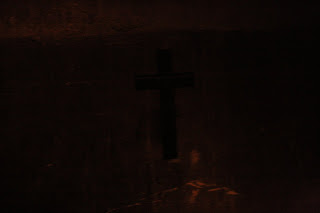 Afterwards we went to Montmorency Parc in Old Quebec to get some pictures of the statues of Louis and Marie Hebert. Along the way we found a Statue of Bishop Laval. 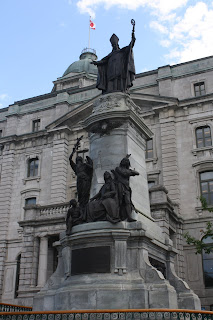 The statue is a grouping of three, Louis is the centre statue, rather high up. I had to go across the street to get pictures. 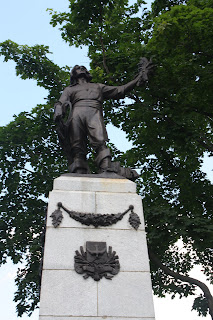 On one side is a statue of their son in law Guillame Couillard. 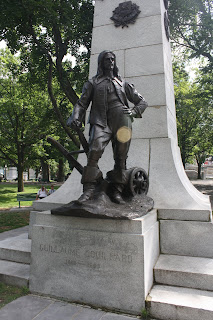 And on the other side is Marie Rollet. Here is a picture of Dave, Laura, Amanda, and Daniel with their great-great-great- etc grandmother. 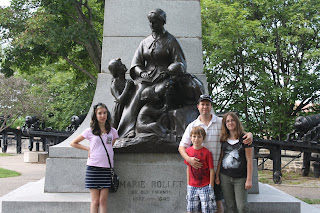 By this time it was getting close to 4:00. We rushed back to the hotel to claim our van before being charged extra and headed to Montreal for dinner and an overnight stop. The next day we headed for home sweet home and ended our two week road trip. 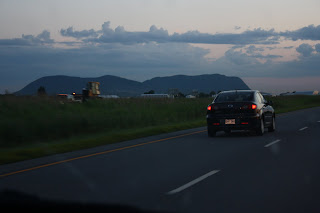 In looking back on our trip, I would love to go back to any of the places we visited but the two that would top my list would be Salem and Quebec City.
Posted by Unknown at 8:32 AM